To share your memory on the wall of James Thomas, sign in using one of the following options:

Provide comfort for the family of James Thomas with a meaningful gesture of sympathy.

Print
A Time to be Born


A Time to Die

James (affectionately called Jamey and Jimmy) passed on August ... Read More
A Time to be Born


A Time to Die

James (affectionately called Jamey and Jimmy) passed on August 5, 2019 in Queens, New York where he resided most of his life.


A Time to Learn

Jimmy was educated in the public schools in Queens, New York.


A Time to Embrace

Jimmy was the proud father of his son Thomas James Thomas and he loved his role of being the only brother to his sisters.


A Time to Remember

Jimmy enjoyed all aspects of cars. He enjoyed working with cars, anything that was mechanical, all electronics, carpentry and he loved trains. He enjoyed attending the New York street festivals.
Jimmy never gave a no response to any of his family members and he was always punctual and took pride in his accomplishments. Many in the community knew him as the bike man because he took pleasure in riding his bike. He always was willing to give a helping hand to others. Jimmy was known in the neighborhood as the handy man, because he was always fixing something for someone. From washing windows to Christmas decorations, to laying floors. He did it all.

He is preceded in death by his birth Mother-Sylvia Thomas; Mother-Ethel Curtis and Father-George M. Curtis; Timothy Teague (step-brother).

Provide comfort for the family by sending flowers

We encourage you to share your most beloved memories of James here, so that the family and other loved ones can always see it. You can upload cherished photographs, or share your favorite stories, and can even comment on those shared by others.

Posted Aug 17, 2019 at 05:20am
Audrey, Valerie and family, you have my sincerest condolences. I am so sorry for your loss. I know how much you love Jimmy. Thank you for sharing your brother with us. Sending comforting and healing energy your way while keeping you in my thoughts and prayers. Love you. -Paula
Comment Share
Share via:
LG

Posted Aug 15, 2019 at 09:49pm
Audrey and family - I’m SO sorry to hear of his passing and will keep you lifted up in prayers. May his beautiful memories and spirit give you some comfort and hold him in the deepest place of your heart 🙏🏽🦋.

May he rest in Heaven and God give you strength during this time. I'm here for you always. Love you ❤️🙏🏽😘
Comment Share
Share via:
KW

Posted Aug 14, 2019 at 03:22pm
My deepest sympathy and prayers are with you and the family during this difficult time. May God's grace continue to give you strength on the passing of your beloved brother Jamie.

Posted Aug 13, 2019 at 05:15pm
Audrey and Valerie, so sorry to hear of the passing of your brother James. May God give you peace and comforting during this difficult time. You and your family will be in our prayers.
Comment Share
Share via: 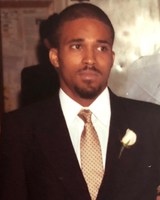