To share your memory on the wall of Eustace Lord, sign in using one of the following options:

Provide comfort for the family of Eustace Lord with a meaningful gesture of sympathy.

Print
Eustace Leonidas Lord, first of his name, passed away on Tuesday, July
9, 2019. It was a beautiful day for a beautiful man.

He was a winter baby, born on December 28, 1932. Herbert Hoover was president of the
United States. T... Read More
Eustace Leonidas Lord, first of his name, passed away on Tuesday, July
9, 2019. It was a beautiful day for a beautiful man.

He was a winter baby, born on December 28, 1932. Herbert Hoover was president of the
United States. The Yankees beat the Cubs, four to zero in the World Series. And Duke Ellington
wrote: It Don’t Mean A Thing If It Ain’t Got That Swing. One of five children, Eustace (Lee) was
the first-born son of Levi Lord and Mildred Thornhill in Bedford Stuyvesant Brooklyn.

After graduating from Boys High School, he entered the United States Air Force in 1952 where,
because of his skills as a trained printer, he worked on the military newspaper, Stars & Stripes.
Upon his honorable discharge in 1956 he had earned a Korean Service Medal, The UN Service
Medal, a Good Conduct Medal, the National Defense Services Medal, and an Outstanding Unit
Award. But what he talked about most during his time in the service was entering and winning
the base dance contest.

He met, courted, and married Doelta Dunn on August 16, 1958. Next week would’ve been
their 61stwedding anniversary. That’s a damn good run; and way before Tinder.

Eustace went to work for the New York City Fire Department as the Compositor in Charge
of the Reproduction Unit. In 1978, his service and dedication to the job earned him the Leon
Lowenstein Award given to him by the first African-American Fire Commissioner, Augustus A.
Beekman. Eustace retired in 1991 and he became an honorary battalion chief.

Eustace Leonidas Lord is survived by his wife, Doelta Lord; and their children: Bryan and
Leighann Lord; as well as Eustace’s eldest son, Wayne Davenport (please hold your questions until
the end) and daughter-in-law, Vanessa Davenport; former son-in-law and friend, James Mendrinos;
his sister Phyllis Fisher, his brother, Clyde Lord, his granddaughter Shayla Dominique (husband,
Chris), and his great grandchildren: Veronica Shay, Philip Junior, and Jayda Victoria; as well as
a bevy of nieces and nephews.
Well, those are the facts; but we are more than just our milestones, are we not. This husband,
father, and friend was charismatic, funny, generous, wise, and kind. He wasn’t a religious man, but
he was a good man. He talked to everybody whether they were the CEO or the janitor. He often
said, that of the two, the janitor was the most important person to know because they actually had
the power to get things done.

This uncle, cousin, and godfather was such an excellent photographer that he and his wife
photographed many family weddings and events.

This sports fan was an avid bowler who toured the country playing in many tournaments,
earning a living room full of trophies. When he could no longer play, he became a coach and a
bowling league mediator. In his youth, he created a baseball team called the Cobras and was more
than a little pleased that he could still fit into the jacket. He was a big Brooklyn Dodgers fan. He
spoke of the team often, and never really got over them leaving New York. He once said that if things
had truly been equal, the Cy Young Award would’ve been called the Satchel Paige Award.

This co-worker, confidante, and artist had a way with words. He wrote beautiful stories and
amassed a black movie video collection to rival The Schomburg Center in Harlem.

This homeowner, taxpayer, and hard worker could fix anything. It wouldn’t be pretty, but it
would be fixed. He wasn’t a clotheshorse, but he cleaned up well and he looked great in a hat. He
loved dogs and people, in that order. He had an abundance mentality when it came to love. He
believed the more you gave away, the more you got in return. If love could’ve kept him alive, he
would’ve been immortal. And to those who love him still, he is.

Provide comfort for the family by sending flowers

We encourage you to share your most beloved memories of Eustace here, so that the family and other loved ones can always see it. You can upload cherished photographs, or share your favorite stories, and can even comment on those shared by others. 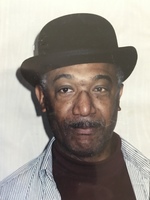